Titanium: The Path to Recovery is now available at Amazon.com in ebook and paperback editions 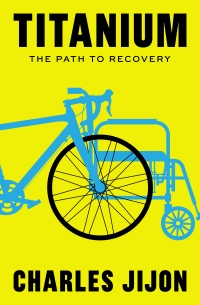 Titanium: The Path To Recovery

Here are the basics:

I grew up in the Bronx; am the product of a Catholic school education - Holy Spirit Academy and Cardinal Hayes High School; graduated from NYU with a BA in math and computer science; went to work for IBM after I graduated; married Irene; moved to Chatham, NJ; earned my MBA from Fairleigh Dickinson University; Cathryn was born; became a financial advisor; returned to IBM to sell professional services; worked for a boutique consulting company selling professional services; was run over by a car.
Now you know the major bullet points.  But my life really occurs in the space between the bullet points. The following story gives you an idea:

Families are a funny thing.  Years ago, at a family dinner with my in-laws, a kindergarten-aged Cathryn noticed a few white hairs peeking out from Irene's jet black mane.
She asked “Why are some of your hairs white, mama?”
My wife replied, jokingly, “every time you get into mischief, one of my hairs turns white, sweety.”
Cathryn, her mouth forming a surprised "o", looked from Irene to my mother-in-law, whose hair was all-white.  “Abuela, what did mama do to make all of your hair white?”
My daughter inherited a sense of humor from somewhere in the bloodline, and has a brain that’s always working.  When she was four years old, I got home from work on a hot summer day to find the Nanny exasperated.  Miss Cathryn had tossed half a container of baby powder into the air in her room, and turned on the fan, because she wanted to make it “snow inside”.  The Nanny had spent hours cleaning the powder, which had gotten onto all the surfaces in the room.  And it wasn’t the first time this had happened, I learned.  I had to correct this behavior, but how?
One of the “experienced” dads at work had found it really effective to have the miscreant generate a list of punishments, from which the parent would choose. Cathryn tried to be slick and came up with things like, “I’ll eat all my Cheerios at breakfast.”  Of course, she was fond of a second bowl at breakfast, so I sent her back to the drawing board.  She finally narrowed it down to no television for two days, or no dessert after dinner. Acceptable, I thought; strong enough to make a point, but not so severe that I’d have to pay for therapy later. I decided to let her choose. After much thought and furrowing of her four-year old brow, she said solemnly, “I choose no dessert.”  But as we walked down the stairs, she tugged on my hand.  I looked down at her.  She had a twinkle in her eye, and with a con-artist’s smile, asked, “But can I have a snack before bed?”
A few years later, when she was in middle school, I joined Toastmasters, and while I was preparing my icebreaker, I put the following question to Cathryn: “Honey, how would you describe me to someone who’s never met me?”  She looked up at me, brushing brown curly ringlets from her face.
“Well, you’re a tall tale teller, a family man, and a pretty good singer,” she said.
High praise indeed. Still, I felt short-changed: after years of raising her, piano lessons, horseback riding lessons, art classes, ballet classes, coaching her softball team, doing everything I could to give her a wonderful childhood - she said nothing about the kind of father I was.  So I asked her, “but how would you describe me as a father?”
My friends, the most dangerous negotiations are the ones you don’t know you are in.  I knew I was in trouble when I saw that twinkle in her eyes again.  With the look of a shrewd negotiator, she cocked her head to one side, held out an upturned palm, and said, “You’re an OK dad.”
“Ah.  I see.  And if I were to give you 5 bucks?”
“Well, that would make you a good dad.  But for $20, you could be the the World’s Best Dad!”
Just then, Irene, my beautiful wife, walked into the kitchen.
“What’s going on?” she asked, unaware of the extortion that was playing out.  Before I could say anything, Cathryn piped up, “Dad wants to know how you would describe him to someone who’s never met him.”
Then she stood behind Irene, while giving me a sly smile.  The word “Stubborn!” shot from my wife’s mouth, like a bullet from a gun.  Three times.  As an afterthought, she hastily added, “cheerful, thoughtful and funny.”  Faint praise is better than none, I suppose.
“Honey, we’ve been married for 18 years.  What would you tell this person about me as a husband?”  At which point, Cathryn stood up on her tippy toes and whispered something in her ear.
Irene looked at me, held out an upturned palm, and said, “You’re an OK husband…”
Sometimes, it takes a lot of work, and the occasional bribe - I mean gift - to be the World’s Best in the eyes of your family.  But I’ve always found it to be worthwhile, because when my family is happy, I’m happy.
Now you know a little more.